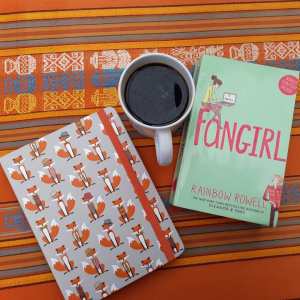 “Underneath this veneer of slightly crazy and socially inept, I’m a complete disaster”

MY THOUGHTS: What a cute, lighthearted, yet poignant story about love, life, and muddling through the hard times. To sum it up, I absolutely loved Cath and her world. She warms my little book nerd heart and reminds me of myself during my freshman year of college. Cath is struggling to acquaint herself with her new, upturned life when Wren decides she needs to be different – by leaving her twin behind. That made me really sad, but, without it, Cath wouldn’t have developed into the girl she becomes. Cath is, understandably, bereft and a little pissed off, but mostly sad that Wren doesn’t want to embark on their college journey together.

Cath is just so damn relatable. She is too heavily involved in the internet world that she can’t see what’s happening in her own life until it’s right on top of her. She writes fanfic on an internet forum which keeps her busy and feeling like she has loads of people depending on her, but her time spent doing that takes away from her time available to do other things such as make friends and find the dining hall. Although, that’s mostly down to her social anxiety. Enter roommate Reagan, who forces her out of her comfort zone, and Levi, who gets all the heart-eyes!

I felt these two had the biggest effect on her development. They were massively great people for her! Reagan is a bitchy, older student who wanted nothing to do with another roommate and got Cath for her trouble. She definitely isn’t cuddly by any means, but totally has more aspects to her than the one she initially shows to the world. Her prickliness is pretty endearing. Levi is such a wonderful guy! Totally my favourite, by far. He goes above and beyond for everyone he meets and is nearly always wearing a smile. I love him. He’s the perfect gentleman, down to earth, and hilariously funny. I loved how he called her Cather start to finish. He’s uncompromising in his personality, which was super refreshing.

“You don’t get to be a mother if you show up after the kids are already grown up.”

This was a totally cute read, but still dealt with some heavy topics. Cath’s parents are separated, yet her mother tries to come back into Cath + Wren’s lives. Cath is beyond upset and unwilling to allow this. I get that. Having a mother myself who I am unlikely to have back in my life in the near future, I get why she was so upset. You don’t get to walk away when times get hard and then come back in whenever you think it might be easier. As a parent, it’s all or nothing – you don’t get to pick and choose the bits you like. Also, Wren deals with some addiction, and mental illness is brought into the story by both Cath’s anxiety and their dads bipolar disorder. I love the way the author deals with each topic seriously while still injecting some humour to lighten it up. I will absolutely be looking into more Rainbow Rowell novels in the future!

BLURB: From the author of the New York Times bestseller Eleanor & Park. A coming-of-age tale of fan fiction, family and first love.

Cath is a Simon Snow fan.

Okay, the whole world is a Simon Snow fan…

But for Cath, being a fan is her life—and she’s really good at it. She and her twin sister, Wren, ensconced themselves in the Simon Snow series when they were just kids; it’s what got them through their mother leaving. Reading. Rereading. Hanging out in Simon Snow forums, writing Simon Snow fan fiction, dressing up like the characters for every movie premiere.

Cath’s sister has mostly grown away from fandom, but Cath can’t let go. She doesn’t want to.

Now that they’re going to college, Wren has told Cath she doesn’t want to be roommates. Cath is on her own, completely outside of her comfort zone. She’s got a surly roommate with a charming, always-around boyfriend, a fiction-writing professor who thinks fan fiction is the end of the civilized world, a handsome classmate who only wants to talk about words… And she can’t stop worrying about her dad, who’s loving and fragile and has never really been alone.

For Cath, the question is: Can she do this? Can she make it without Wren holding her hand? Is she ready to start living her own life? Writing her own stories?

And does she even want to move on if it means leaving Simon Snow behind?

2 thoughts on “Fangirl by Rainbow Rowell”