Right, so I live in Ireland. The distant younger sister of the United Kingdom, and the strange cousin of the United States, that is never invited to the best parties… We rarely get great international authors on tour, and it’s even more rare that we get a book convention…(PLEASE CAN WE ORGANISE A BLOW OUT BOOK CON HERE ON THE EMERALD ISLE?!?) 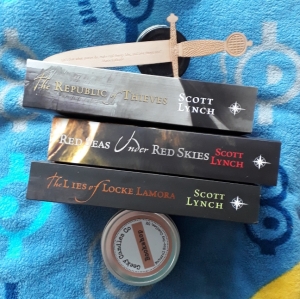 Despite all this, a couple of weeks ago, Scott Lynch (proclaimed author of The Lies of Locke Lamora) and Elizabeth Bear (prolific author of more speculative fiction works than I wish to count) CAME TO IRELAND! They were apparently on some tour of the UK (thank you, Gollancz) and decided to spend a day with us on this beautiful island. The weather was fab, so I can’t say I blame them.

They were completely hilarious, and such a wonderful pair! One of the first things Scott said on taking the stage was ‘on a more upbeat note, at least none of us are dead here right now.’ I laughed more during this talk than I ever have (bar the Diana Gabaldon talk in California, 2014) at an author’s talk. They are definitely people I’d love to know and will absolutely be seeing them again next time they come to Ireland!

Also, fun fact: he’s on a first name basis with George RR Martin 😮 *faints* They share an editor and are evidently friends. I’ve never been so close to someone who is friends with such a legend….

They discussed World Con and Euro Con, so keep an eye on those lineups, if you’re a massive fan! I was lucky to get all my Gentleman Bastard novels signed and personalised, but will have to see them again after book 4 is published.  I was actually running late at the end of the talk and when the signing was beginning. To the point I was ready to just head out the door, but I *reeeeally* wanted to meet him and get the books signed, so I waited. Luckily, the PR lady realised I was freaking out about the time and pulled me to the front so I could go quickly! I was so impressed and thrilled with life!