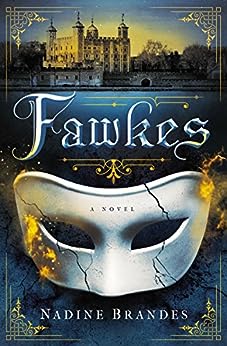 “I breathed deep through my nose. No matter my answer, there was no going back. I was committing to either treason or cowardice. I’d been a coward once already that day.No longer.”

MY THOUGHTS: Like many other MCs, Thomas Fawkes is an idealist, albeit an extremely honest with himself idealist. He admits to being a coward and many other things besides. This honesty made me like him all the more; although, he’s definitely no hero. If he had tried to hide it, I would have scoffed and the story would have lost a little something for me. As it was, the story was slow moving and pretty boring in my view. Keepers and Igniters are similar to modern-day religion with opposing views that are irreconcilable. Catholics versus Protestants many years ago is what comes to mind. This society had one way of thinking versus the other, which is pretty normal in most storylines, but this particular one was dangerous. If you were a Keeper, you had a death wish.

“The very topic of White Light has caused Igniters to hunt down and murder Keepers. Wouldn’t you be wary if you weren’t an Igniter?”

Thomas doesn’t have strong family ties as his mother died when he was young and his father was away working on some plot. Now, Thomas is looking for answers to his Keeper background and upbringing after being raised and schooled among Igniters. Why is White Light so taboo among Keepers, while, for Igniters, it brings freedom of power and allows more power than Keepers seem to be comfortable with? White Light is the source of all power, so Keepers believe it must be locked down and ignored. Does speaking to White Light really make people power hungry or is that simply a personal trait that is not really correlated with being an Igniter? Do Keepers, or anyone really, fully understand White Light? Or is White Light truly bad? These are all questions Thomas sets out to answer for himself.

Then Emma, a girl from Thomas’ school, turns up in London and kind of throws a spanner into his plans. She pushes him to ask more questions and a colleague of the plot demands they ‘seek the source’. She’s an Igniter, but has something she’s hiding. He doesn’t know whether he can trust her or not, but still allows himself to get close to her, as it allows him access to information necessary to the plot.

“My culture had affected my way of thinking without my consent,How many other things had it shaped without my knowing it? It made me want to examine things – to seek the heart of matters. Of skin color, of Keepers, of Igniters, of White Light, of all my assumptions.”

If you’re involved in a plot that will change the way your society works in the long run, do you still stand up for what you know to be right in your day to day life? Or do you let that go so as not to draw attention to yourself and keep yourself free for the bigger picture?

A few times throughout the novel, Thomas enacts some heroic act – usually in relation to Emma. But I want to know – is he doing it to impress her or rather because her conviction give him the strength to be less than cowardly? I feel like it’s a bit of both, really. He’s like any young boy, wanting the attention of the pretty girl from school, but being also involved in such a huge plot, he has other things on his mind, as well. He wants to be brave and stand up for what he believes, the trouble is he’s a coward who doesn’t know what to believe yet.

All in all, I struggled to finish this book. I very nearly DNF’ed it, but was so close to the end that I forced myself on. The last 10% got better and then had a terrible ending. I wouldn’t recommend this to very many people simply because I found it boring. The historical aspect was slightly interesting, but the characters that made up the story ruined the plot for me entirely. I didn’t find them relatable or interesting, so I just could not get into the story. I found myself avoiding the book at quite a few points.

BLURB: Thomas Fawkes is turning to stone, and the only cure to the Stone Plague is to join his father’s plot to assassinate the king of England.

Silent wars leave the most carnage. The wars that are never declared, but are carried out in dark alleys with masks and hidden knives. Wars where color power alters the natural rhythm of 17th century London. And when the king calls for peace, no one listens until he finally calls for death.

But what if death finds him first?

Keepers think the Igniters caused the plague. Igniters think the Keepers did it. But all Thomas knows is that the Stone Plague infecting his eye is spreading. And if he doesn’t do something soon, he’ll be a lifeless statue. So when his Keeper father, Guy Fawkes, invites him to join the Gunpowder Plot—claiming it will put an end to the plague—Thomas is in.

The plan: use 36 barrels of gunpowder to blow up the Igniter King.

The problem: Doing so will destroy the family of the girl Thomas loves. But backing out of the plot will send his father and the other plotters to the gallows. To save one, Thomas will lose the other.

No matter Thomas’s choice, one thing is clear: once the decision is made and the color masks have been put on, there’s no turning back.

“..blowing up three hundred Parliament members and the king of England wasn’t restoration. It was death with no phoenix to rise out of it.”

All quotes are taken from an ARC and may not match the final product. Thank you so much to Thomas Nelson for providing me with this ARC via NetGalley in exchange for my honest review!