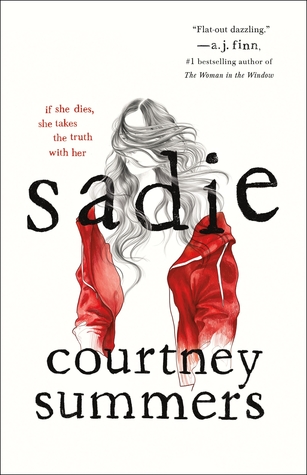 Sadie hasn’t had an easy life. Growing up on her own, she’s been raising her sister Mattie in an isolated small town, trying her best to provide a normal life and keep their heads above water.

But when Mattie is found dead, Sadie’s entire world crumbles. After a somewhat botched police investigation, Sadie is determined to bring her sister’s killer to justice and hits the road following a few meagre clues to find him.

When West McCray—a radio personality working on a segment about small, forgotten towns in America—overhears Sadie’s story at a local gas station, he becomes obsessed with finding the missing girl. He starts his own podcast as he tracks Sadie’s journey, trying to figure out what happened, hoping to find her before it’s too late.

I can’t take another dead girl.

This book broke me apart. It is absolutely one of my most anticipated releases for the year and probably in my top 5 favourite reads this year. It was so compelling and beautiful, yet gut-wrenching. I read this more than two weeks ago and it’s still lingering in my mind. I don’t think I’ll be letting this fade anytime soon. I honestly do not have the words to properly review this novel because it was just that devastating to my soul. I must have cried at least 4 times. I remember I was only 3% into it when I first got emotional…

Except it’s not in my head, it’s in my heart and she’s the same woman who told me if you’re going to follow anything, it might as well be that.

Sadie is for all the lost girls seeking to make the world a better place. This is one of those novels that sinks into you, grips you by the feelings, and refuses to let go. It has really changed me as a person for many reasons. With the upbringing I had, I wasn’t too far off being Sadie. Courtney Summers has written a book for the lost girls and the ones who feel they never quite fit, but still believe in good and love and loyalty.

It all suddenly, and belatedly, felt too real, the things these girls had gone through, what can happen to missing girls.

I loved the way Sadie was written – part crime drama podcast, part Sadie’s narration. It was unique to me and hearkened to all of the crime dramas I find myself so addicted to so often. It was interesting to get so many perspectives throughout the novel – and to realise that no matter your upbringing or socioeconomic status, little girls (and all children, really) are vulnerable, even if we do our best to keep them safe always. That’s not to say we shouldn’t let them have experiences and do things, but pay attention! It’s important to make sure they know they have a voice. Go out there, friends, and be kind, but speak up when you need to do so. And hug your loved ones!

Please go read Destiny’s review because she puts this all into words so much better than I ever could…find it here.

COURTNEY SUMMERS lives and writes in Canada. She is the author of What Goes Around, This is Not a Test, Fall for Anything, Some Girls Are, Cracked Up to Be, Please Remain Calm, and All the Rage.

Thank you so much to Wednesday Books for providing me with an eGalley. All quotes are taken from an ARC and may not match the final release.

Do a Google Image search and you’ll see its main street, the barely beating heart of that tiny world, and find every other building vacant or boarded up. Cold Creek’s luckiest—the gainfully employed—work at the local grocery store, the gas station and a few other staple businesses along the strip. The rest have to look a town or two over for opportunity for them- selves and for their children; the closest schools are in Park- dale, forty minutes away. They take in students from three other towns.

Beyond its main street, Cold Creek arteries out into worn and chipped Monopoly houses that no longer have a place upon the board. From there lies a rural sort of wilderness. The highway out is interrupted by veins of dirt roads leading to nowhere as often as they lead to pockets of dilapidated houses or trailer parks in even worse shape. In the summer- time, a food bus comes with free lunches for the kids until the school year resumes, guaranteeing at least two subsidized meals a day.

There’s a quiet to it that’s startling if you’ve lived your whole life in the city, like I have. Cold Creek is surrounded by a beau- tiful, uninterrupted expanse of land and sky that seem to go on forever. Its sunsets are spectacular; electric golds and oranges, pinks and purples, natural beauty unspoiled by the insult of skyscrapers. The sheer amount of space is humbling, almost divine. It’s hard to imagine feeling trapped here.

But most people here do.

You live in Cold Creek because you were born here and if you’re born here, you’re probably never getting out.

That’s not entirely true. There have been some success sto- ries, college graduates who moved on and found well-paying jobs in distant cities, but they tend to be the exception and not the rule. Cold Creek is home to a quality of life we’re raised to aspire beyond, if we’re born privileged enough to have the choice.

Here, everyone’s working so hard to care for their families and keep their heads above water that, if they wasted time on the petty dramas, scandals and personal grudges that seem to define small towns in our nation’s imagination, they would not survive. That’s not to say there’s no drama, scandal, or grudge—just that those things are usually more than residents of Cold Creek can afford to care about.

The husk of an abandoned, turn-of-the-century one-room schoolhouse sits three miles outside of town, taken by fire. The roof is caved in and what’s left of the walls are charred. It sits next to an apple orchard that’s slowly being reclaimed by the nature that surrounds it: young overgrowth, new trees, wild- flowers.

There’s almost something romantic about it, something that feels like respite from the rest of the world. It’s the perfect place to be alone with your thoughts. At least it was, before.

May Beth Foster—who you’ll come to know as this series goes on—took me there herself. I asked to see it. She’s a plump, white, sixty-eight-year-old woman with salt-and-pepper hair. She has a grandmotherly way about her, right down to a voice that’s so invitingly familiar it warms you from the inside out. May Beth is manager of Sparkling River Estates trailer park, a lifelong resident of Cold Creek, and when she talks, people listen. More often than not, they accept whatever she says as the truth.

This is where they found the body.

4 thoughts on “Sadie by Courtney Summers (eARC review) and an excerpt!”