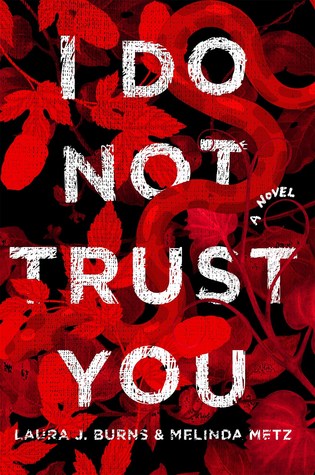 TITLE: I Do Not Trust You

Memphis “M” Engle is stubborn to a fault, graced with an almost absurd knowledge of long lost languages and cultures, and a heck of an opponent in a fight. In short: she’s awesome.

Ashwin Sood is a little too posh for her tastes, a member of an ancient cult (which she’s pretty sure counts for more than one strike against him), and has just informed Memphis that her father who she thought was dead isn’t and needs her help.

From the catacombs of Paris to lost temples in the sacred forests, together they crisscross the globe, searching for the pieces of the one thing that might save her father. But the closer they come to saving him—and the more they fall for one another—the closer they get to destroying the world.

Memphis (M) is a really interesting character from the off. She’s had an amazing upbringing and then suffers an overwhelming loss – that of her father who is her closest person. When she meets Ash and discovers he’s still alive, everything changes. And her quest begins!

M is hands down my favourite of all the characters (although, Mike runs a close second) because she reminds me a lot of myself at 18. She’s strong and smart and fiercely loyal to those she cares about – she goes above and beyond to try to save her father. She also seems very adult for her age at first, but then she begins to become a bit more immature. I think a lot of it is down to stressing about her father and the most recent part of her life. She’s also hilariously funny and I loved that she used words like bananapants!

Ash I didn’t like so much. I loved how well-formed his character was, but I hated that he was always hiding things from M, which is slightly hypocritical of me seeing as M is doing the same. I think the difference for me was the reasoning behind it for each of them. He’s doing it for his religious beliefs, and M is doing it to save her father. I suppose they are both in the right, but a human being’s life is a lot more important than a cult. In my eyes, anyway! He is flawed, yet still interesting. I found myself trying to figure out what his motives were more than once – clearly they don’t entirely align with his cults designs.

I loved the use of mythology and mysticism entwined throughout the story. It made it that much more intriguing, and mythologically-themed fiction is my favourite!! One of my favourite scenes is when M makes the point that all mythology was once a societal belief system. It made me ponder the likes of Christianity, Islam, Buddhism, Judaism, etc., and wonder how long will it take for those to become nothing more than mythology and for some other belief system to take over.It’s interesting to see how once the majority of people no longer believe something, it becomes mythology.

I really enjoyed this book for many reasons. It was a really good read and I would absolutely recommend it to friends! I found it different to what I would usually read, which was really refreshing and totally raced through it.

Thank you so much to Wednesday Books for providing me with a proof copy. All quotes are taken from an ARC and may not match the final release.

“You should’ve seen Miss Memphis here get into it with Nick last period,” Brianna said, squeezing in between M and Inez at their usual spot in the cafeteria. “She shut him down with her crazy ancient cultures voodoo.”

M shrugged. “I wouldn’t try to debate him in Physics. I just know more about Rome than he does.”

“She’d debate him in German, in German,” Brianna joked. “And if he tried to fight back, she’d switch to Greek.”

M threw a French fry at her. “I can’t help it. I grew up speaking different languages.”

“And learning about pharaohs. And becoming well versed in the history of the Etruscan people,” Ayana said, putting on a fake accent that was probably supposed to be British. “Oh, and setting broken bones in the bush.”

“That only happened once,” M muttered. Her friends laughed.

“Anyway, it was epic. Thanks,” Brianna said. “I can’t stand fighting with people, and Nick always goes after me.”

“You think he’s coming to the party tonight?” Brianna asked.

“Probably. Everyone else is,” Inez replied. “Even Memphis.” M made a face. “Anything to get out of the house. Bob and Liza would expect me to play board games with them otherwise.” Her friends exchanged a glance. M winced. “No offense.”

“Oh, were you offending someone?” Nick piped up from behind her. “Good girl.”

Immediately Bri looked down, while Ayana rolled her eyes. Inez just smirked, glancing back and forth between M and Nick.

“I was not offending anyone. I only meant I don’t like parties,” M said. She didn’t bother to turn toward him. It didn’t matter; he inserted himself onto the bench next to her anyway. A little tingle ran up her spine as the scent of his co- logne hit her nostrils, spicy and warm.

“Mmm, they’re boring. Everyone talking about the prom or the senior trip or whatever. I’m over it,” Nick said.

Me too, thought M, wishing she didn’t agree with him. She loved her friends, but even they were all about high school. M just didn’t care. High school was nothing more than what she had to get through before she could leave. After the crash, after the shock of Bob and Liza becoming her guardians, she’d asked if she could go off to college early, either Boston University or the University of Sheffield in England. Both had the kind of archeology program she wanted and would’ve let her in with no questions. They knew her father. They knew high school was a waste of time for someone like her.

But her guardians said no. They said she needed stabil- ity and normalcy after losing her dad. Never mind that traveling the world and taking care of herself was normal for her. While she and Dad technically lived in Boston, she’d never spent more than a few months there during the school year. They traveled. Half the year spent on digs. She missed it.

“What’s with this thing, anyway? Is it to fight off bad guys?” Nick teased, finding an excuse to touch her. He reached for M’s collapsible bo staff, tucked in the inside pocket of her jacket like always. But before he touched it, be- fore his flirty smile registered in her mind, M had already grabbed his hand, twisted it back to the breaking point, and used the pain to push him off the cafeteria bench and onto the floor. With her other hand, she whipped out the stick and shoved it up against his throat.

M froze. He’s just hitting on you. Her friends were aghast, and everyone nearby watched, openmouthed. Nick’s eyes were wide with panic.

“Freak,” he muttered, climbing to his feet. He glanced around, noticing the barely concealed laughter from onlookers. “Jeez, I just wanted a fry,” he joked, as if he hadn’t been humiliated, then hurried out of the cafeteria.

“What. The. Hell?” Inez asked. “He was flirting with you and you beat him up!”

“I know.” M groaned, shoving her staff back into her pocket. “I didn’t mean to. It was just reflex.”

Her friends were silent. She’d freaked them out. Should she explain the years of self-defense and martial arts training? That she and Dad ended up in some rough places? Her friends lived in a city, they understood danger. Sort of. In a nice, upscale Boston kind of way.

M sighed. There was no point in trying to explain. No- body understood her life.

“You kinda push all the guys away,” Brianna pointed out quietly. “Maybe not like that, but still . . .”

“I don’t do romance,” M replied. She was done with love, period. She’d loved her parents, and they were both gone. Love hurt too much. It was better to steer clear of it.

They all ate in silence for a minute.

“I mean, he is an ass,” Ayana said finally. And everybody laughed.

MIKE: Fine, your text woke me.

M: I don’t think that glyph is a lotus. It’s bending the wrong way.

MIKE: It has to be a lotus. If it’s not, the whole phrase is wrong.

M: The rest of the phrase never sat well with Nefertum anyway.

MIKE: Your dad said it was a lotus.