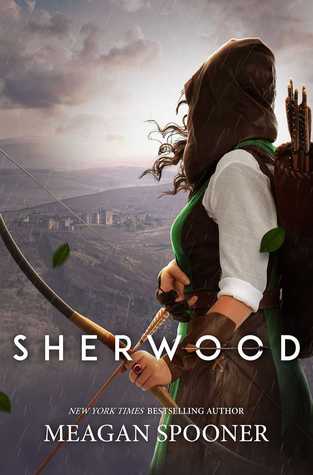 Robin of Locksley is dead.

Maid Marian doesn’t know how she’ll go on, but the people of Locksley town, persecuted by the Sheriff of Nottingham, need a protector. And the dreadful Guy of Gisborne, the Sheriff’s right hand, wishes to step into Robin’s shoes as Lord of Locksley andMarian’s fiancé.

Who is there to stop them?

Marian never meant to tread in Robin’s footsteps—never intended to stand as a beacon of hope to those awaiting his triumphant return. But with a sweep of his green cloak and the flash of her sword, Marian makes the choice to become her own hero: Robin Hood.

I very nearly loved this book. Now, I really enjoyed it, but there were a couple of things that irked me. Don’t fret, we’ll start with the positives! First of all, the characters and world building! So amazing… Meagan knows how to bring them to life! They all felt so vivid and real – I loved them so. The complexity was unreal and just calls to attention the complexity of the real world. There are usually things going on for people we may not always see for various reasons and said things may colour their motivations. The world is painted in shades of grey, and we always need to keep that in mind.

The writing itself is beautiful! I loved Meagan’s storytelling ability and it just drew me in and kept me reading! Now, I’m really sad Robin had to die for this story to happen, but he’s still a massive part of the overall story. And I love him. There are flashbacks to his memory of their childhood together and it’s so wonderful to read those bits. Marián gets a real shock about halfway in, and it really brings to attention the fact we don’t always know why things are the way they are, but there might be a good reason. The whole lawful vs. morally right conversion is very well done!

There’s a particular character I actually hate. And that for me, as I think I’ve mentioned in previous reviews, is a huge sign of an amazing author. If you can write a character that I hate, but is realistic and honest, you’ve got me hooked. I’ll definitely be reading her next releases. Oh, and have to read Hunted ASAP. Now, the reason I didn’t completely love this book was the ending…

I would have rather seen Marián end the story alone than agreeing to marry him! Ugh, I am a fan of HEAs, but I don’t think she needs him in her life. I don’t feel that he’s worthy of her hand, and I felt it really detracted from the story. I’m so sad about that. There was no real romance and it felt very arranged… they had no connection or chemistry and I hate it… ugh. ANYWAY

I have to say this was a FOUR STAR read for me, but I still think you should all add it to your TBRs!

Thank you so much to Meagan Spooner and  HarperTeen for the ARC.