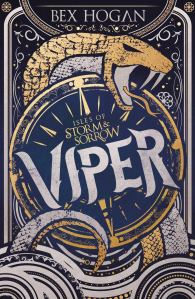 Respect has to be earned among Snakes, and I have done nothing to gain theirs yet

The story takes place in the Eastern Isles. There are 12 in all, but we only really get the eastern 6 in this story. Most of the tale is on The Maiden, Adler’s ship, but also on a few of the isles. My favourite was the Sixth Isle, but followed closely by the Fourth. The world was rich in detail and multi-faceted, so much so I could clearly visualize them. The isles sounded amazing – mostly – and there are a few I wouldn’t mind visiting. Everything is explained beautifully and I am hooked on Hogan’s writing!

Marianne has lived her whole life on a ship under her father’s command. He’s the Viper, which is basically the King’s hand of justice on the sea. Marianne has been pretty oppressed her whole life because she’s not a killer like the rest of the crew. Her compassion and capacity for forgiveness is inspirational and I really loved her. She had loads of depth and was flawed, but so well-written. Definitely a favourite heroine. Her best friend (if you can call her that), Grace, is the best woman on the ship. She’s a highly skilled assassin who is usually assigned to look after Marianne. Grace is also in charge of Marianne’s training, so they are as close as can be on a ship full of secrets. Torin, the prince, is also a pretty major character, interestingly enough. I really loved his role in the whole story and look forward to getting more of him in the next installation. Bronn, Marianne’s ex-best friend, and also a Snake, was surprising! Hogan wrote him so well! I really didn’t like him in the beginning, which is exactly what she wanted, I believe, but then my opinion of him changed. The Viper, Adler, was such a phenomenal villain. I actually hated him! So well done, Hogan! Amazing writing.

Essentially, this was a coming-of-age tale about a girl who discovers things are not all they seem on the surface. Once she begins to uncover the truth, there’s a lot more hiding than she initially expected and it turns out her entire world is upended. It’s a really good thing she has so many great friends at her back. The Viper expects her to succeed him one day, but only if she can get over her aversion to brutal murder. The real question is: will Marianne find her strength in time to save the isles and avoid getting herself killed?

This wasn’t what I expected at all. In fact, it’s absolutely 100 times better than I ever could have imagined! It has an amazing heroine, pirate life on the high seas, betrayal and deceit, and phenomenal supporting characters. The story is well-paced and such a fast read, but it was never boring and everything contributes to furthering the story. I was shocked by one of the scenes at the end and was highly upset about it, but won’t tell you why because that would be a spoiler! WAH! Anyway, I really loved this story and cannot wait to get more of Marianne and the gang.

Marianne has been training to be the Viper for her entire life – to serve and protect the King and the citizens of The Twelve Isles – but to become the Viper and protect the islands she loves she must find the strength to defeat her father.

He will make me a killer.
Or he will have me killed.
That is my destiny.

Seventeen-year-old Marianne is fated to one day become the Viper, defender of the Twelve Isles.

But the reigning Viper stands in her way. Corrupt and merciless, he prowls the seas in his warship, killing with impunity, leaving only pain and suffering in his wake.

He’s the most dangerous man on the ocean . . . and he is Marianne’s father.

She was born to protect the islands. But can she fight for them if it means losing her family, her home, the boy she loves – and perhaps even her life?

A brave heroine. An impossible dilemma. An epic new fantasy trilogy set on the high seas.

Thank you so much to Bex Hogan and Hachette Children’s Group/Orion Children’s Books via Netgalley for the ARC.